November 7, 2011, 2:25 pm EST.
Enlarge to notice the sunspots on the disk of the sun. Visable are sunspots 1338-1343. Didn't know sunspots have numbers? Check out the SOHO project at: http://sohowww.nascom.nasa.gov 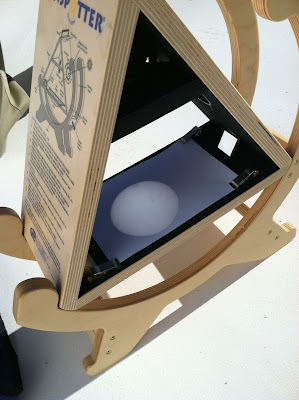 Visit the Virginia Science Standards Institute blog to see what VSSI is all about. This summer four VSSIs were conducted in and around three Virginia State Parks.
Posted by Denny Casey at 7:04 AM No comments:

Nuclear energy making a comeback? | GoDanRiver
Posted by Denny Casey at 11:05 AM 1 comment:

Sunset Solstices
This panorama consists of three separate images from the VMNH Weatherbug webcam stitched together using Microsoft Digital Image Suite. The leftmost image was taken at sunset on the 2008 winter solstice, December 21, 2008 at 5:07 pm. The image on the right was taken just before sunset on 2009 summer solstice, June 21, 2009 at 8:34 pm. What this shows is the distance from the southernmost sunset to the northernmost sunset for our latitude (36.68 degrees north). Over the next 179 days, the sunset will make its way southward again until it reaches the same spot it was last year and will "stop" (solstice is Latin for "sun stand still") and begin its journey northward. This apparent motion of the sun is caused by a combination of the tilt of the earth's axis (about 23.5 degrees) and the earth's revolution around the sun. Click on the image to enlarge.
Posted by Denny Casey at 5:46 PM No comments: